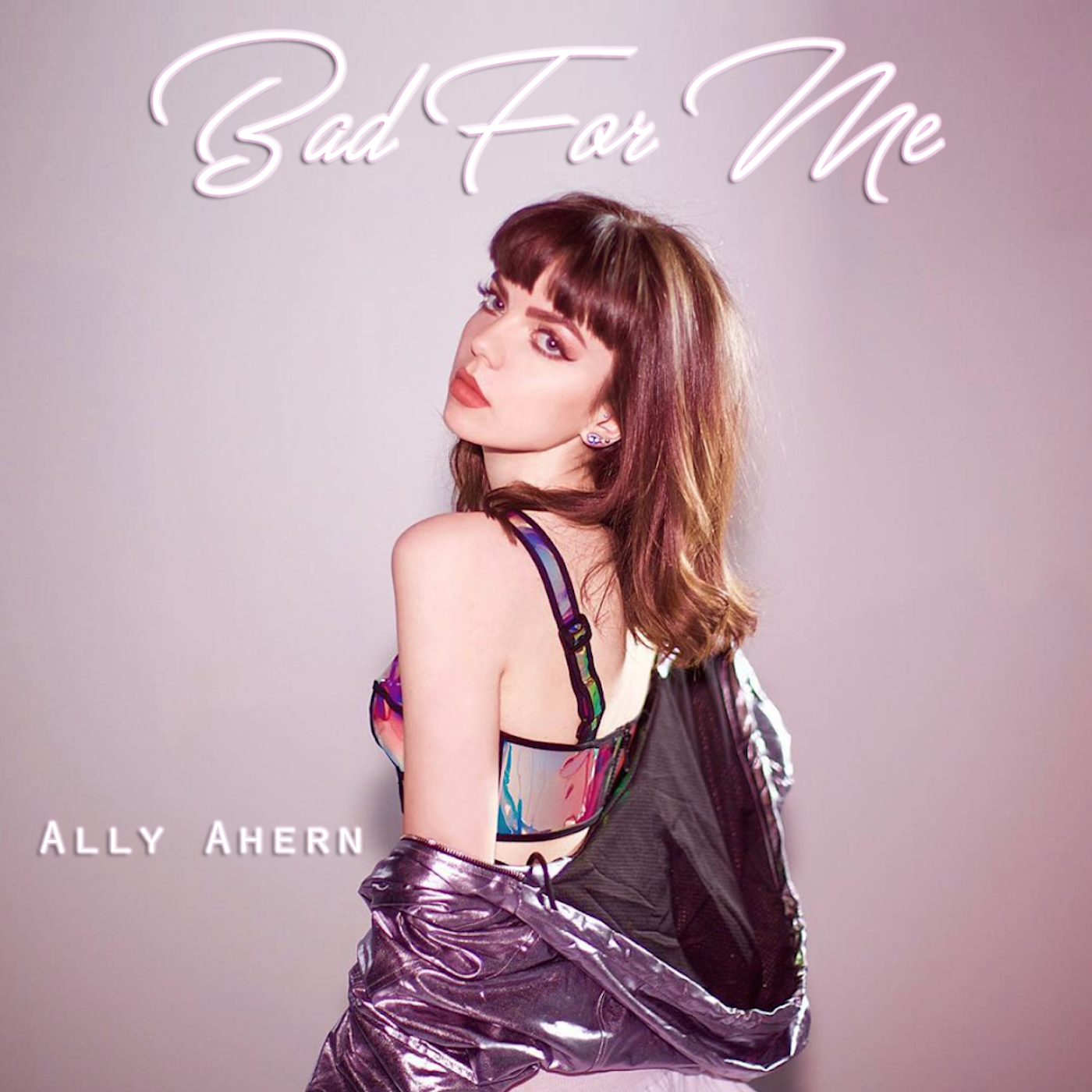 Ally Ahern might only be 19, but her mind seems much older.

Although the youngster is new to the industry, Ally already seems to have gotten to grips with the ins and outs of the everchanging music industry. Ally’s bold confidence and outspoken nature shines in ‘Bad For Me’, her sensual yet commandeering trap-pop banger merging Lana Del Rey‘s moodiness with Selena Gomez‘s commercial friendliness.

As our chat proved, that confidence Ally possesses developed through years of personal hard work plus battling double standards and trying not to succumb to high pressure environments – all of which has prepped her for what should hopefully be a fruitful career in music.

Ally Ahern: I’ve been listening to Niia a lot and am in a Bright Eyes and The Cure phase again. Tove Lo’s album BLUE LIPS has also been a vibe recently; I can’t stop listening to the second track “disco tits”. One of my good friends Madeline Kassen also just put out a song called “Twisted” and I’m in love with it.  Also – Radiohead is always on my recently played.

Could you tell us about one significant experience from your life so far which influences your music?

Overall, I’d say what’s impacted my music is more so just strings of events and hardships I went through that made me stronger.

If I was a crayon I’d say I’d be a glow in the dark bubblegum pink crayon. It would be called something weird, like “Pink Poison”.

If you could only choose one song to play every time you walked into a room for the rest of your life, what would it be?

Definitely the refrain of “Boss Ass Bitch”, I would love to have that on loop every time I walk into a room.

I swear to it, I’ve written songs that have told the future. I’ll start writing some heavy song and have absolutely no idea where it is coming from or what it’s about – then two weeks later whatever I was writing about either happens to me or someone close to me.

Does everything Nirvana count? I went through a phase for a good two years where I was completely and utterly obsessed with them. I still have posters of Kurt Cobain all over my room in my parent’s house and a stack of Nirvana related magazines and articles.

Most of my childhood I always thought I was going to be a visual artist – I really loved sketching and painting. I wrote songs from a young age, mostly piano instrumentals, but didn’t take it super seriously. Then in middle school I was having a really rough time in life – I was the complete outcast at my school, the weirdo. At the time it was lonely, but now I cannot tell you how glad I am that I didn’t peak in middle school or high school. So, that prompted me to start writing and singing more on my own as an outlet and that’s when I started thinking of it as an actual career path. It was my big secret for quite some time though – I refused to sing in front of anyone, including my parents, until around the very end of middle school, and I didn’t let anyone know I had been writing songs either until later.  Also, another big thing that did it for me was I was the drummer in the jazz band at my public school starting 6th grade and I was totally digging it. When I auditioned for the drummer spot, I was the only girl and beat all the boys who auditioned for the spot. Girl power, yes!

I have taken to calling my sound “dark pop”. It seems to sum up what I’m doing right now. I’d say my style is really versatile though because I’ve dabbled in a bunch of different genres.

How does ‘Bad For Me’ represent the theme or message of your upcoming EP?

The EP is all about self-discovery, self-ownership, independence and all that jazz. ‘Bad For Me’ is the track where I’m acknowledging a weak spot I have for someone.  It doesn’t mean I’m letting them take a piece of me, but I’m sort of exploring this deep-rooted desire I have for someone that is well… bad for me. And in the song, I can’t figure out why the heck I’m so dazzled by them! But I just am. I think everyone has that person at some point in their lives.

Do you have a favorite lyric from ‘Bad For Me’?

Probably “You’re everything wrong for a girl like me, yet everything on everything that I will ever need”. I feel like that sums up how I felt about the person I wrote it about.

Oh yes – I’m always learning and I will always be learning. I’m living out in LA right now so I’m having to learn a lot very quickly about how things really go down in the industry at the core of it all. Also, most importantly – through my music I am constantly learning about myself, how to become the best version of me, and how to love myself and everyone around me in a fiercer way every day. To me, that is what’s so rewarding about what I do, and what keeps me so invested.

Yes yes yes. The industry truly is dominated by men so most of the time I’m working with men, which there are plenty of men in the industry that I work with that are wonderful, but there is something so special about getting to vibe with other strong women in the industry! And just to scratch the surface on one of the issues women face in the industry: there is so much pressure on us to sexualize ourselves in a certain way. Yet, when we do, we are shamed for it. As women, we should be able to do whatever we want to do with our sexualities and bodies, and if that means flaunting it like there’s no tomorrow then yes queen, and if that means keeping it to ourselves, then yes queen! This sort of thing should not be up to anyone else except US, and what WE want to do with our lives as individuals.

Yes, it can always improve. We’ve made some progress but there is still a long road ahead.  Women are definitely not represented in the way they deserve to be. Where we can start to make progress is by supporting every single woman around us, by not shaming each other for the choices we make and not ever pushing a woman into a choice she doesn’t want to make. I cannot emphasize this enough. Judging a woman based on her lifestyle, appearance or anything at all is simply toxic in any circumstance, period. This type of judgment within the industry and in society in general needs to stop.

Have you noticed any double standards when it comes to sex and gender in the music industry?

Think about it – men don’t have the same pressure on them to sexualize themselves, to say just enough without saying too much, or to have to present themselves in a certain way in order to be appealing. These double standards of course translate beyond the music industry and into other industries as well.

Have you noticed any challenges faced by musicians in today’s industry?

I think a challenge for musicians nowadays is social media. Social media isn’t everyone’s cup of tea, but if you are in the music industry now, you have to make it your cup of tea and drink it down whether you like it or not. Social media is a double-edged sword.

Which music venue do you dream of performing in?

When I was younger, I always wanted to perform at the Metro Chicago and then I did, and now I’d say a new venue goal would be to perform at one of The House of Blues venues. But frankly, anywhere with a good energy to it is a venue I can dream of performing in.

My dad has always said to me “Now get out there and kick maximum ass”, and I’d say this has most definitely become my life motto.

Lots of stuff. I’ve been exploring a ton in my writing and have been meeting a lot of amazing people in the industry that I’m learning a lot from. I’ve just been waking up every day and getting out there and seeing where it leads me, and really great things have come of this mindset. So, we shall see where the rest of the year takes me!

Oh yes yes yes. How could I not?