When the three HONEY POPCORN members – Yua Mikami, Miko Matsuda and Moko Sakura – dropped the incredibly catchy bop “Bibidi Babidi Boo”, the group popped off – but not exactly because of their musical talents.

“Bibidi Babidi Boo” has all the sugary, bright and colorful sounds you’d expect from a new Korean girl group, so it’s no surprise it’s since racked up nearly three million views on YouTube. However, HONEY POPCORN’s debut whipped up a storm of controversy in Korea yet a wave of support from international fans: not only were all three girls Japanese, but they were also all adult film actresses.

In a rare and exclusive interview with Yua Mikami, the group’s ringleader, the pop-porn star opens up about her group’s controversial debut, setting her sights on global domination and what’s next for HONEY POPCORN. 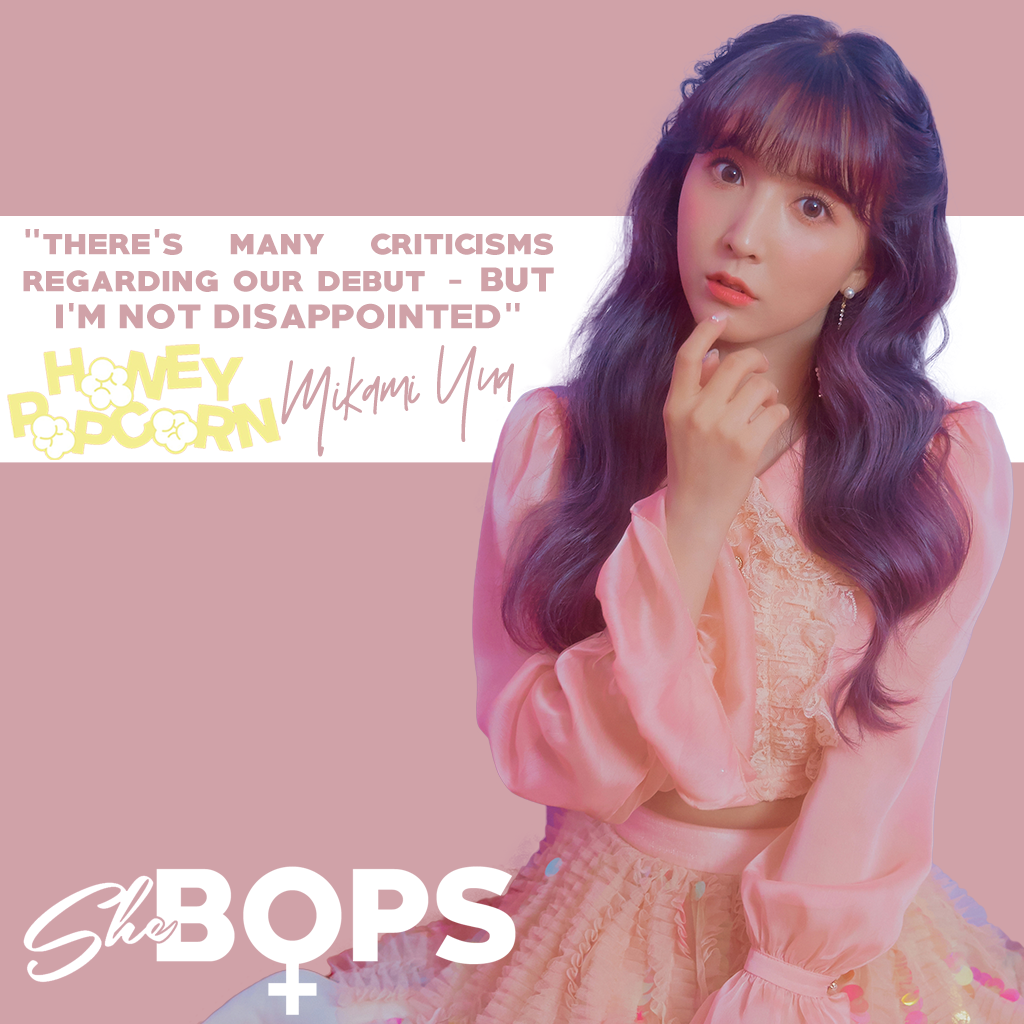 SheBOPS: What is the most interesting thing that happened to you recently?

Yua Mikami: I got a MacBook to upload on YouTube. Originally I thought I wouldn’t be good at it, but once I actually tried it, it was surprisingly fun. And now, I find myself using it in my house. I’m new and inexperienced but I will do my best.

It has been one year since Honey Popcorn debuted. What has changed since then?

I don’t have as much activity in HONEY POPCORN. Personally I’m exploring new challenges, such as launching my new fashion brand. I want to keep trying various things from now on. But now, I’m also preparing for HONEY POPCORN’s next release, so please look forward to it.

Why did it take so long for Honey Popcorn to come back?

It took a lot of time to find new members of HONEY POPCORN. We have finally restarted our activities.

How do you explain Honey Popcorn’s musical style?

HONEY POPCORN’s musical themes are about girl’s ideals and hopes.

What is Honey Popcorn’s backstory?

At the beginning, we were criticized heavily. However, you must pay attention to how to overcome the criticism.

What was the reason for spending your own money on Honey Popcorn’s debut? How much money did you spend?

There seems to be a lot of such information out there, but the truth is – I paid just a little!

Why do you think there is a mixed reaction to Honey Popcorn’s debut? Are you disappointed by it?

We are developing as K-pop artists, so there’s been many criticisms regarding our debut. Many people have their opinions, but I’m definitely not disappointed.

It is common for Korean idols to debut in Japan and receive positive feedback from Japanese audiences. However, unkind comments were expressed by Korean audiences because Honey Popcorn is from Japan. Do you think there is a double standard?

We’ve been attacked and there have been various opinions, such as criticism. However, we will rise above the double standard by being a success as K-pop artists in Korea.

It is true and I’m very happy. We are really glad that you support us and I’m so happy when I see messages in English on Twitter and Instagram. I’ll do my best to be active around the world.

What is the next step for Honey Popcorn? Do you have plans to make music in Japanese?

We must maintain activity as a K-pop group because we are still inexperienced. We might create a song in Japanese for our next release. Please look forward to it.

You are a big fan of TWICE, but do you like other female musicians? Are you a fan of LOONA?

Yes, I’m a big fan of TWICE. It doesn’t mean that I love only particular girl groups, as I love all girl groups. I do know LOONA, and it’s very interesting how the members keep improving.

What problems do you think female entertainers experience?

It’s not just celebrities: I hear that women are stalked, harassed or sexually assaulted in the news. I want it to stop because it hurts my heart very much. With regards to female K-pop artists, all of them have incredible figures and I think that it’s a struggle to maintain that very slim figure.

Do you have some advice for other women?

Regardless of gender, I feel the most important thing is to live happily in my own way. Let’s live and enjoy what you want and do what you want.

Do you have any regrets?

I have no regrets. Not one. Except when I can’t get what I wanna eat.

RUKA: I am still learning, but I’ll do my best with members of HONEY POPCORN.

MOKO: I’m active from the beginning of HONEY POPCORN. I would like to do my best to make more people cheer for us.

NAKO: I just joined, but I want to overcome both fun and painful things with all the members. Based on the support of the fans, we want to be able to give our fans dreams and hope. Through the good times and bad times together with members of HONEY POPCORN.

YUA: Thank you all of our fans for always supporting us. Three new members join HONEY POPCORN and we hope to do well. Please continue to support us!