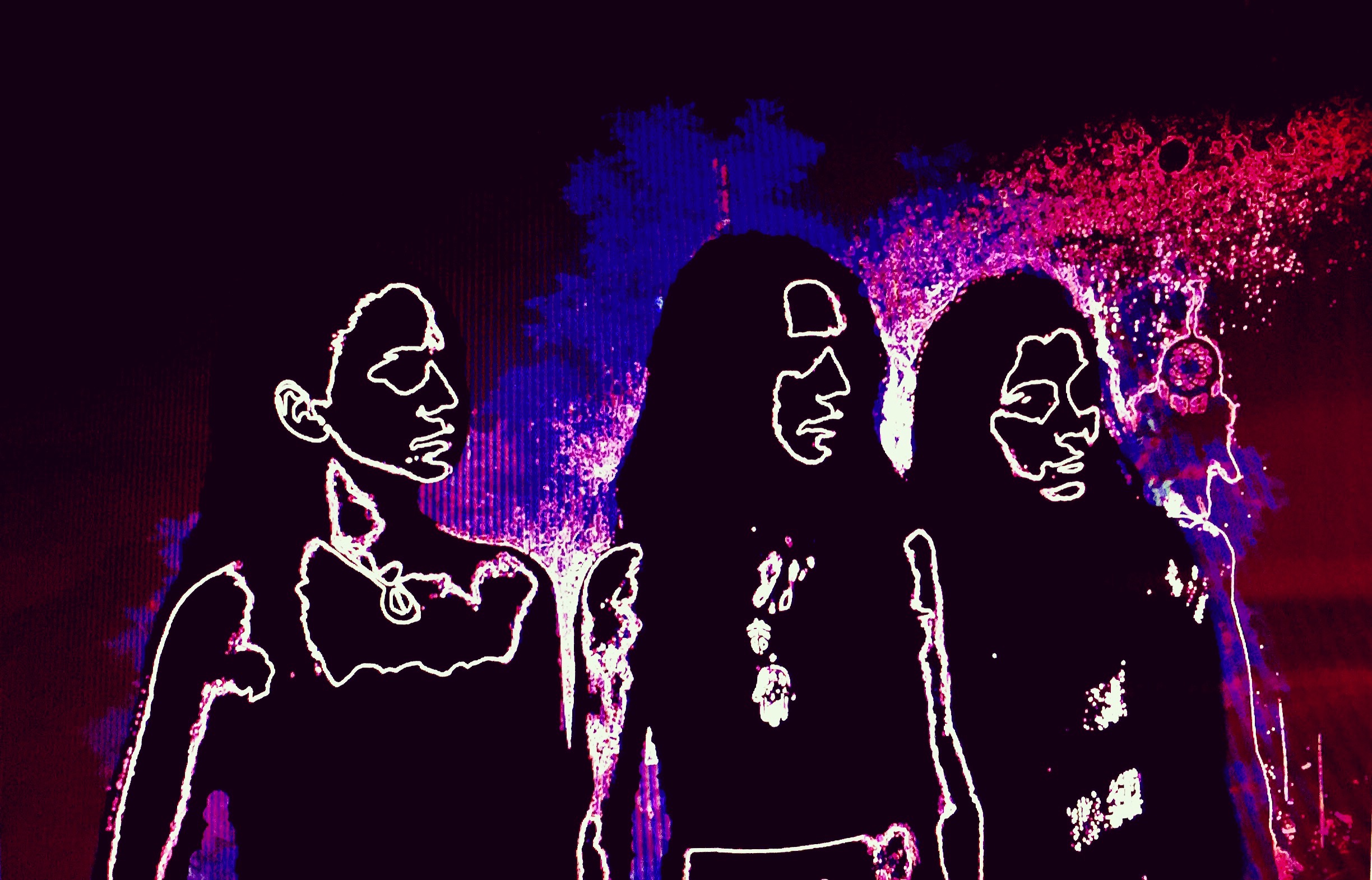 London trio Fire In Her Eyes are more than just a band. The three-piece also act as a production house, where they create psychedelia inspired visuals to compliment their catalogue of vibezy tunes. Represented by an Eye of Horus sitting pretty over a trippy background, the soul of Fire In Her Eyes’s music is the way the three girls (Gabrielle plus sisters Natasha and Daniella) angelically harmonize over their pop sounds reminiscent of the swinging 60s and soulful 70s. The indie queens are sure to continue building a strong fanbase should they keep pushing forwards and continuing to carve out their gorgeous niche sound.

Natasha: A lot of Heatwave, especially their Hot Property album.

Daniella: I love the band The West Coast Pop Art Experimental Band, particularly their song ‘The Smell of Incense’.

Gabrielle: I’ve been listening a lot to Boards of Canada’s album Tomorrow’s Harvest and Beach Fossils.

Fire In Her Eyes: ‘Tomorrow Never Knows’ by The Beatles describes our lives well. You never know what’s around the corner…

Daniella and Natasha would both be purple crayons as they find it a calming colour; Gabrielle would be a green crayon because she loves nature.

If we could steal credit for any song, it would probably be ‘After the Love Has Gone’ performed by Earth, Wind and Fire.

Daniella: I was really into Sister Act when I was younger and was hugely inspired by it. In the film, the lead character led a choir. Soon after, I ended up leading a youth choir myself on a Sunday where I got to work out harmonies etc. It really felt like I was in Sister Act.

Natasha: I got my first MP3 player when I was around 5 and, ever since then, I’ve been listening to music pretty much non-stop.

Gabrielle: At a very young age, I fell asleep to my dad listening to classical music every weekend and felt as though it seeped into my dreams.

What effect does music have on your daily life?

Music is our lives; it’s what makes us happy and occupies our time.

What does the name Fire In Her Eyes symbolize?

Fire In Her Eyes symbolises our energy and dynamic as a group.

You are currently an independent production team, but would you trade indie life for a major label if the opportunity presented itself?

Regarding major labels, we’d possibly be open to that idea in the future but, for now, we’re happy being independent.

As indie artists, how do you stay motivated and focused?

To stay motivated and focused, we’re constantly finding new sources of inspiration and things to write about through our own life experiences, as well as seeking inspiration from other bands.

You say that you grew up in “a reality where creativity was not appreciated” – what does that mean? Has that influenced your artistry today at all?

Maybe it’s a bit harsh to say that creativity was not appreciated, but our creativity was sometimes overlooked at school when we had to follow the curriculum. However, this gave us motivation to spend a lot of time in the practice rooms. A lot of our songs wouldn’t have been written if it wasn’t for spending so much time there.

Why are you so drawn to psychedelic visuals and lyrical themes such as spiritual awareness and the concept life?

We think that the relationship between audio and visual is extremely significant so we aim to enhance our lyrics and their meaning through interesting visuals. In terms of the lyrical themes, we feel that they are most relevant to our lives and what we’re interested in.

Daniella and Gabrielle, you wrote a song together when you were 10 years old – what was the song about? Would you recreate it in your current style?

Every song has its own unique quality, and the song we wrote when we were 10 was what we were feeling in the moment. The song is about a break up. We made a recording of it at the time and would definitely be up for recreating it with our current setup.

Daniella and Natasha, what’s it like being sisters in a band? Does that connection help or hinder your working relationship?

Being sisters in a band helps the dynamic as we know each other extremely well so our natural chemistry helps us feel connected when writing, performing and harmonising.

‘Eye of Horus’ is like, three different songs in one. What inspires your unique sound?

When you sing about something that you really feel, it definitely comes across. Generally, we sing about things we’re interested in, and that’s where we find our inspiration.

Our creative process varies depending on the instrument that we’re writing on and what we’re writing about. As a whole, we come up with an idea or theme, then create a vibe and build on that. It just depends…

When song writing, our songs tend to follow a natural formula that has developed over time from working together but, at the same time, each song is a separate work.

Have any female artists inspired you in your life?

Female artists that inspire us include Sister Sledge, Grace Slick from Jefferson Airplane and Stevie Nicks from Fleetwood Mac.

At the moment, we’re into Erykah Badu and The Jones Girls.

As women, is there anything about the music industry that frustrates you?

Both men and women are succeeding in the music industry so, ultimately, the music itself is more important than whoever’s singing it. Some people often put too much emphasis on things other than the music, for instance, what someone looks like.

For us, the main thing is the music… we’re not too worried about that kind of thing at the moment. Personally, we haven’t encountered any negativity towards us because we’re female.

What issues do you think female musicians (and musicians in general) are facing today?

We’d be better equipped to answer this question in years to come.

A quote we consider to be our life motto is: ‘Take each day as it comes.’