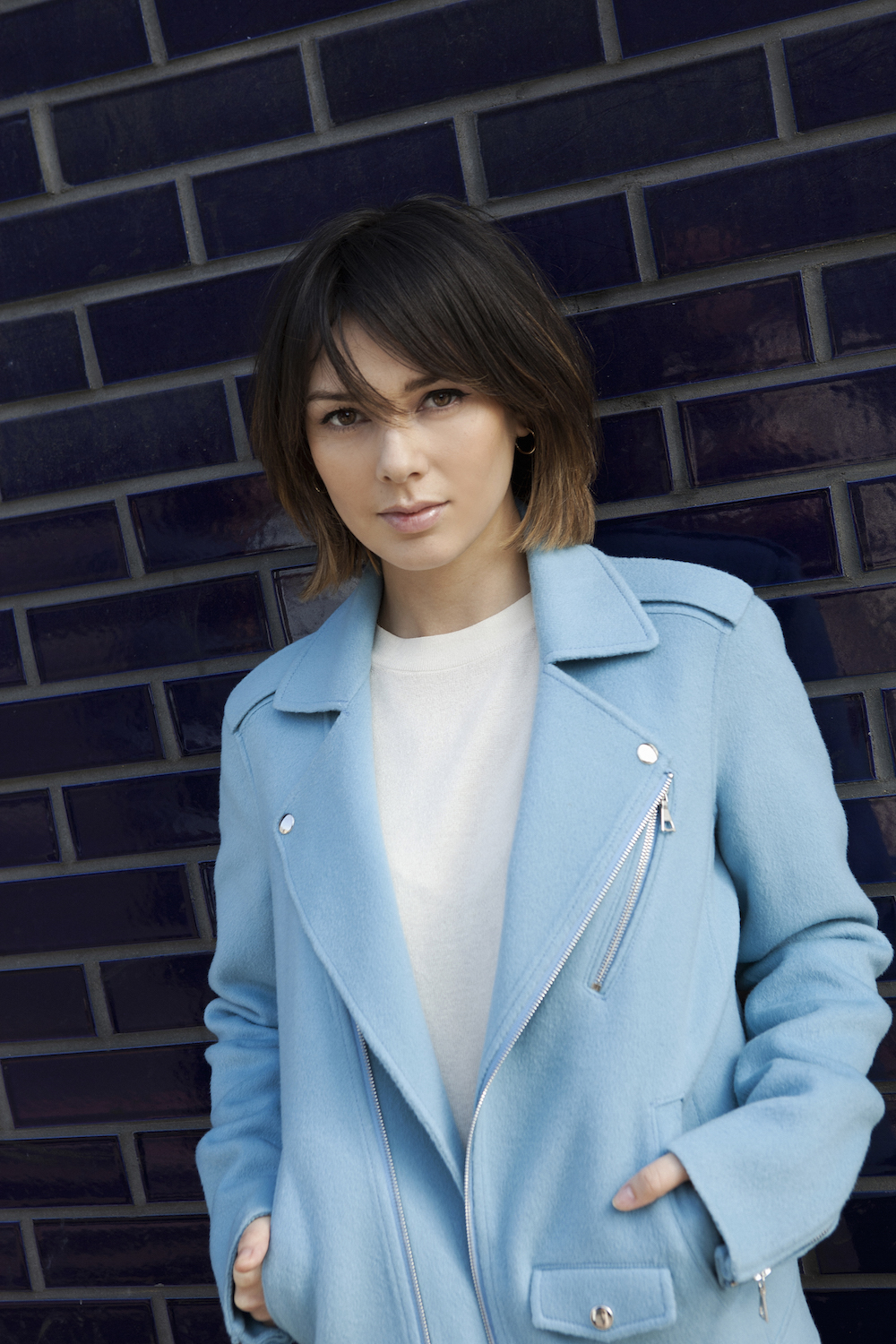 Since the release of her ambient, ethereal numbers “Digby Road” (think “Hometown Glory” but with twangy guitars instead) and the sultry “Snowflakes”, French-born Londoner NUUXS has slowly but surely been establishing herself as a critical darling: Wonderland, Spotify, Clash, BBC and Nylon are all fans of NUUXS’ seductive soul sounds. The chanteuse continues this reign of acclaim with her latest offering “Out the Blue” which she discussed with me, as well as the meaning behind her stage name (pronounced ‘Nooks’) and working with the man behind the Shania Twain comeback.

Could you explain the meaning behind the name NUUXS? It’s very technological looking.

NUUXS is the nickname my friends gave me, short for Anouk which my mother gave me. I know there’s another Anouk, who’s a huge Dutch singer, so thought I’d go with NUUXS – I played around with the spelling and liked the aesthetic of it.

Tell us some more about what inspired your latest single, “Out the Blue”.

An ex sent me a really passive aggressive message, which came quite a few years after our break up. It really was ‘Out the Blue’ as we hadn’t kept in touch since it ended. It was a way of just getting it off my chest, the way he did with his message. I wish him well.

Your look on the cover art for “Out the Blue” is snatching my wig! Have you considered modelling?

That’s very kind of you! I think I’m too short to model, and of course it really helped having a great team: Elliott Morgan (photographer), Kyran Low (stylist) and Salina Thind (make up). Lights, camera action and all that.

What about a range of lashes or hair paint?

I love big lashes but I’m rubbish at putting them on, but I have been practicing and I will succeed! Hair paint is just all kinds of great. I did go pink once, but I’m naturally so dark it took a copious amount of bleach and time to get the right color. I miss it but I think I’m happier having healthy hair now. 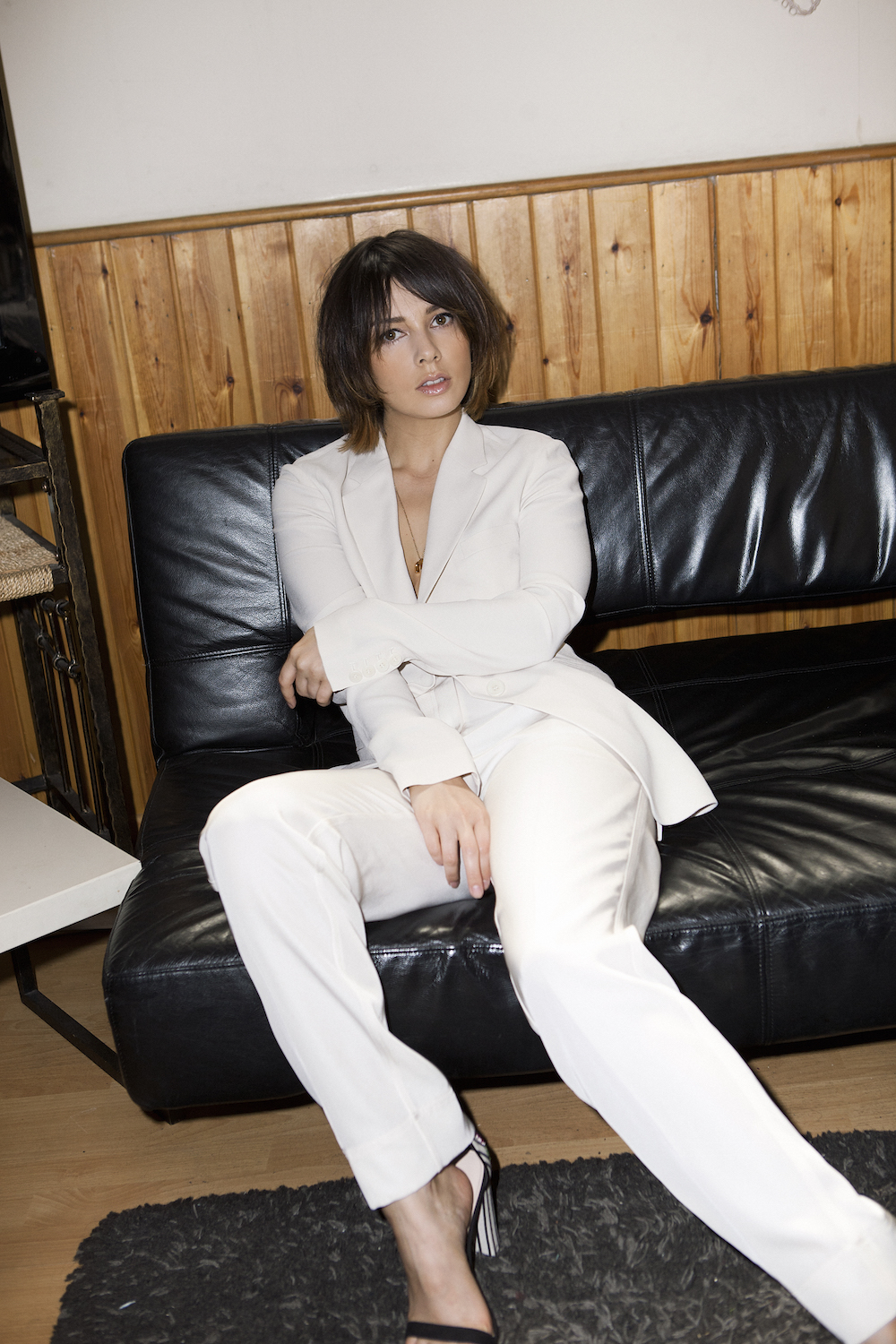 You were born in France, but grew up in Hackney. How did that impact you? Would you ever move back to France?

I have the added bonus of being able to speak two languages which is always handy. I moved when I was very young so it didn’t affect me that much. UK is definitely my home but having a holiday home in France would be amazing.

How did you get working with Jake Gosling?

We’re both published by Sarah Liversedge and Simon Platz (who run Bucks Music and BDI) so we met through writing. Working together has been a really organic process.

Is your family supportive of your musical career?

My older sister used to make me sing all her favorite songs in front of her mates and she definitely played a massive part in pushing me onto any stage possible. My family are very creative so it was always clear to them I’d be doing music from a young age.

Who are some good female French musicians to get into?

I literally just discovered Jeanne Cherhal and her song “Voila” and I love it.

Outside of music, what other talents do you have?

I’m a great cook and I definitely like to show it off to my friends; they hate it but love it all at the same time.

Clash once labelled your sound as “wonderfully off piste pop music” – how do you feel about this description?

Haha I thought it was great! I’m definitely aware that my music is a little on the quirky side but it’s what comes naturally to me and I can only hope it connects to people. I try to be as honest as possible with my music.

Which music venue do you dream of performing in?

I would love to perform at Wembley Stadium. That would be a real achievement.

Where are we now?

Where are we now?

The moment you know

You know, you know.

It’s ridiculously simple but it’s the way he sings it, it makes me want to cry.

How do you feel about the representation of women in the music industry?

I think it is getting better and I’m seeing a lot more women supporting each other. However there’s still a long way to go before women are not entirely judged based on their looks and age before their music.

Do you think there’s anything missing from the current pop music scene?

I think their needs to be more originality. Pop music right now seems a bit samey. I love pop music and it’s great when the big songs come out to play.

I’m planning to release an EP at the end of the summer, lots of shows and whatever else the universe has to bring!

Buy or stream “Out the Blue” by NUUXS, out now.