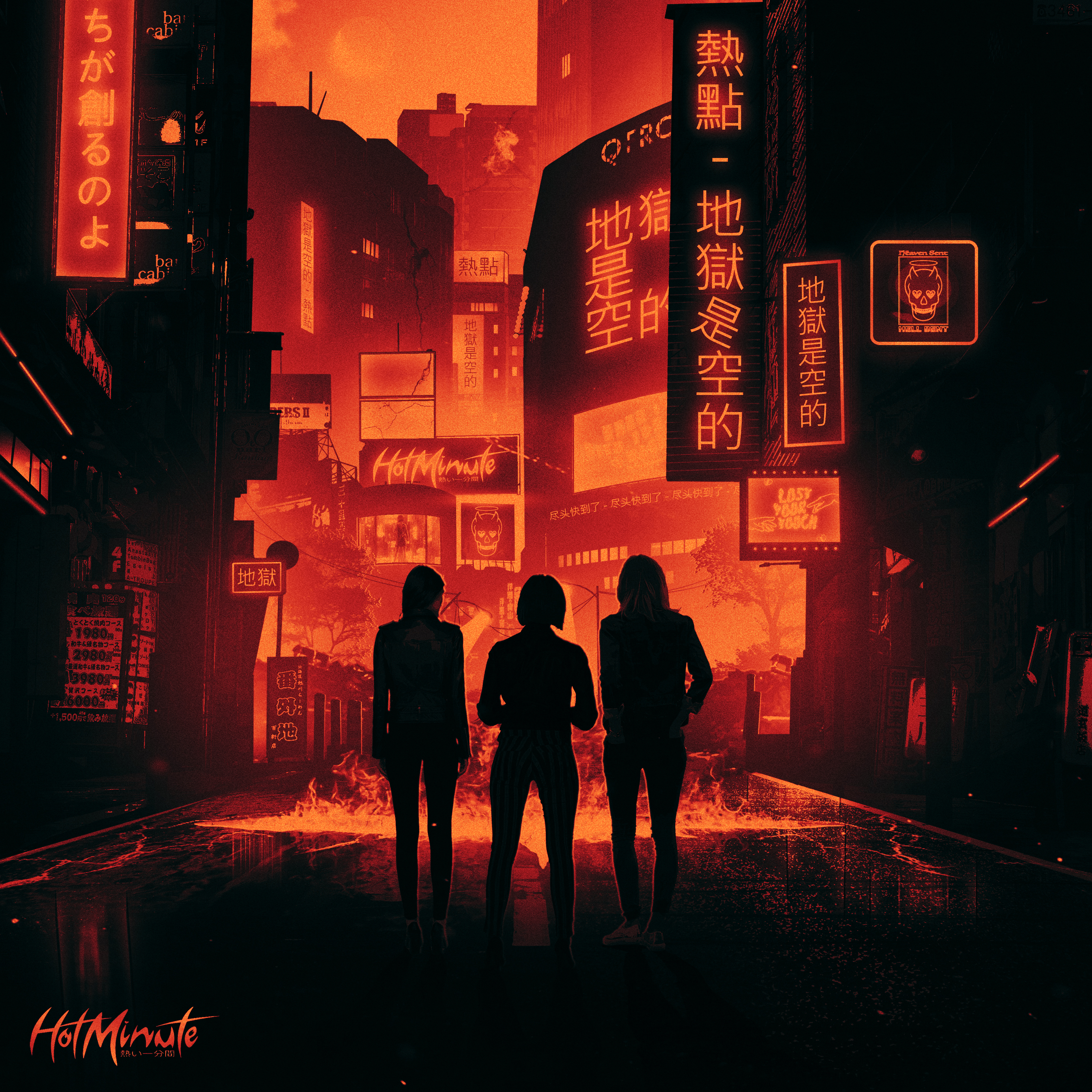 We chat to the three-piece – Keely, Bella and Courtney – about their fantastic new single “Hell Is Empty” as well as why they believe there’s “a problem of imbalanced equality within the music industry”.

Keely: Pink Floyd – Dark Side of The Moon. It’s the album of my childhood and my parents’ absolute favourite, it reminds me of them and sort of feels like home to me.

Bella: Wolf Alice – My Love is Cool. This is a more recent album for me and one I couldn’t get enough of when I was about 15 or 16. I love the heavier music and fearlessness of Wolf Alice in this album to create something completely their own and it’s always one I go back to and enjoy from start to finish. Nostalgia-wise, I think it instilled the desire in my head at that particular age to pursue my own ambitions musically, so it definitely has fond memories attached to it.

Courtney: The Cure – Disintegration. This was the first Cure album I listened to and it really changed things for me, from the way I made music to even the way I dressed. No band has influenced me as much as The Cure and Disintegration was the start of it all for me.

How did your upbringing influence your relationships with music?

Keely: I grew up with a lot of Pink Floyd, Northern Soul and Kate Bush and I just adored all of it. Naturally, as I got older, I started to crave music that had that older, timeless and nostalgic feel and so I started looking further back for my music, but it was only when I really started delving into 80’s music that I fell completely in love.

Bella: The very first memories of music for me too probably involve what my Dad introduced to me when I was younger. I enjoyed a good mix of rock bands in that time, along the lines of The Beatles, Green Day and The Smiths – all different, but pretty guitar based. Generally, as I’ve reached this age, I’ve opened my mind to a lot more genres, with pop and electronic music making up the vast majority nowadays, but the sense of nostalgia that I get from those older songs is still strong even when I listen to them now.

Courtney: My dad is the reason I listen to the music I do. He introduced me to the classic 80s synth pop and always had a Depeche Mode CD on in the car. I knew that was the music that was for me and nothing has changed.

Your sound has a strong 80s feel – what are your favorite sounds to incorporate into your music?

The staple sounds for us are always the sharp, sparkling saw synths and the punchy, full synth basses – we always turn to our trusty Juno for that. We always like to add in a driving, usually twinkling arpeggiator to give our music a little bit more rhythm – and don’t forget a mellow pad to whack underneath it all. As you can tell, we have our essential sounds!

I like to think lyrically it’s very emotionally honest. I only write from personal experience because that’s all I have, so I hope that when people listen to our music, they can enjoy it as a catharsis. Everyone more or less faces the same, or at least similar problems, as they grow up; writing about them is the release for me, and hopefully listening to someone talk about something that they agree with or have been through themselves offers them a temporary release from day to day life for them as well.

What was the recording process like for ‘Hell Is Empty’?

Well, we had it all planned out: it was going to be perfect. We’d booked two days in the studio to record the single the day after we were due to come back from a getaway with our friends. Unfortunately, Keely’s voice decided to completely disappear two days before we were due to record the vocals, luckily it was back just enough to record them to a standard we were happy with on the last day of the studio. In a weird way it sort of works though! It added a rather spooky/raspy effect to the vocals which is definitely on theme for this track.

Do you have a favorite lyric from ‘Hell Is Empty’?

“Baby, Hell is empty and all the devils are here” is definitely for me the most powerful line in the song. It’s a line from Shakespeare’s The Tempest and the character that says this line in the story has the realisation that the people around him are not the people he thought they were or good people. I thought it was a great metaphor for women/minorities when you applied it to the context of the modern-day music industry. We definitely had to learn the hard way that people will sell you a dream and deliver a nightmare.

Absolutely. I’d even go as far to say that if you haven’t noticed, you must have your eyes shut. It’s improving as society catches up with our generation’s mindset but, like anything, that’s brought its own issues to the table as well. There is more of a spotlight on women and minorities in the industry presently but that still isn’t enough; the temporary candle extended to us only highlights that there is indeed a problem of imbalanced equality within the music industry and rectification is going to be a liberating, yet long process. Women artists are present in nearly every genre conceivable, yet only make up something crazy like 21% of the total. Women will continue to be limited until old fashioned expectations and sexist attitudes towards us are fully dismissed.

From personal experience, it feels like girls are expected to be, to a certain degree, less intelligent than boys or men. There is so little female representation throughout music despite there being so many worthy candidates. More female artists will inspire a more diverse set of social standards for music, making it more inclusive for everybody. It’ll produce more incredible music too, which is a good enough reason on its own.

From a female perspective, is there anything about the music industry that frustrates you?

At the moment, the music industry still feels like a boy’s club. There are so many amazing acts arounds that are pushed out of the spotlight because of it. Sometimes people can be a bit patronising towards you; we’re a young band (20-22) so we always get people trying to tell us they know better, when we’ve been doing this for about five years separately. Unfortunately, that doesn’t stop you from having to stand there and listen and act like it’s not a big deal because people are ‘just trying to help’ – we appreciate that, but sometimes you don’t need help.

What challenges do you think female musicians are facing today?

Women are still largely oversexualised within music and are expected to look and act a certain way in order to be successful, making it harder to break through purely based on talent. There’s still a distinct lack of representation, which leaves you feeling like you need to work ten times harder than everyone else just to be taken seriously. You are largely judged on your looks and that can attract some very uncomfortable attention and unwanted advances. Women in music are ‘female musicians’ whereas males are simply referred to as just musicians, like there is a difference between the two. You get given a lot of condescending advice from people who think they know better, especially if you’re younger.

We really love what Phoebe Green is doing right now. It’s inspiring to see unique and talented female musicians break through the barriers. Her tunes are proper bops and she’s definitely got her own individual vibe going; it’s really cool stuff and she’s also from Manchester like us.

Our advice to girls is to just do it. It’s really, really important to learn about the environment that you want to be able to manoeuvre through. Don’t let anyone make you feel like you know any less, or your opinion is less valid because you are a girl. And finally, strong-minded, independent women with clear goals will rub some people the wrong way – but that’s their problem, not yours.

As a new band, what is your biggest ambition?

Our biggest short-term ambition is to fully establish Hot Minute as not only a band, but also a brand. We’re a self-operated machine and we do everything ourselves from the music to the art and the business and branding. We self-release via our own label and have 100% control over everything we do. It’s a big goal for us to be recognised as successful female musicians but also a brand/business. It’s so much more than just music for us – we want to create an entire experience.

Well, let’s just say there’s going to be a consistent flow of music between now and next year. We have a lot planned. We’ve been chipping away at so many ideas and we’re just about ready to start bringing it all to fruition, so keep your eye out for us!